08 May The Spotted Hyena (Crocuta Crocuta) 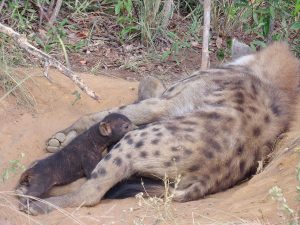 Hemingway hated hyenas. Given their reputations as scavengers, and their creepy laughs, it makes sense that plenty of people don’t like hyenas. In Green Hills of Africa, Ernest Hemingway wrote, “Fisi, the hyena, hermaphroditic self-eating devourer of the dead, trailer of calving cows, ham-stringer, potential biter-off of your face at night while you slept, sad yowler, camp-follower, stinking, foul, with jaws that crack the bones the lion leaves, belly dragging, loping away on the brown plain …”

But let me tell you hyenas are fascinating animals to watch, like these spotted hyenas in Welgevonden. The fact that they have made their natal den for years just on the northern side of 57 Waterberg, is why I’d like to shed more light on hyenas, as they are breeding right in front of our doorstep. Being placed in the centre of the territory, the den has entrances which are connected to several hidden tunnels.

The gestation period lasts around 100 days, a female hyena giving birth to no more than four cubs at once. She is the only one taking care of them in a special den, called a natal den, which is made only for females with cubs. Here, she takes care of them for almost a month.

In order to determine the dominance and get a better feeding position, cubs are fighting each other, although this kind of fight doesn’t always have a happy ending. Unlike the other species, spotted hyena cubs are born with eyes open. Cubs begin to eat meat from kills near the den at about 5 months, but they are suckled for as long as 12 to 18 months, an unusually long time for carnivores. This is probably a necessity, as most kills are made far from the den, and hyenas, unlike jackals and hunting dogs, do not bring back food and regurgitate it for their young.

At about 1 year, cubs begin to follow their mothers on their hunting and scavenging forays. Until then, they are left behind at the den with a babysitting adult.

A question we are asked very often is whether hyenas are related to dogs; in spite of their appearance and what opinion you may have, the answer is no. They are in fact more closely related to cats. Hyenas even get hair-balls just like cats and their direct ancestors were civets, which is a group that they diverged from a few million years ago. However, Hyenas are not members of the dog or cat families – instead, they are so unique that they have a family of their own, Hyaenidae. There are four members of the Hyaenidae family: the striped hyena, the “giggly” spotted hyena, the brown hyena, and the aardwolf (it’s a hyena, not a wolf).

Their skulls are very large and, besides this feature, they also have a sagittal crest for a better attachment of jaws. They also have around 34 teeth, rugged enough to crack bones.
Females have a got a false penis that we call phallus. However, they aren’t hermaphrodites, meaning that they don’t act both as males and females simultaneously. As for pregnancy, only the females give birth and look after their cubs.
Hyenas use various sounds, postures and signals to communicate with each other. One of the most characteristic sounds that hyena produce is ‘laughter’. This sound alerts other hyenas that a new food source is located. Hyenas mark and patrol their territories by depositing a strong-smelling substance produced by the anal glands on stalks of grass along the boundaries. “Latrines”, are places where members of a clan deposit their droppings, also mark territories. The high mineral content of the bones hyenas consumes make their droppings a highly visible, chalky white.
For more information when you visit 57 Waterberg don’t forget to ask your ranger to show the natal den of the hyenas; who knows, you might be lucky to spot some “Spotties”.
Written by ranger Josphat Chinyanda