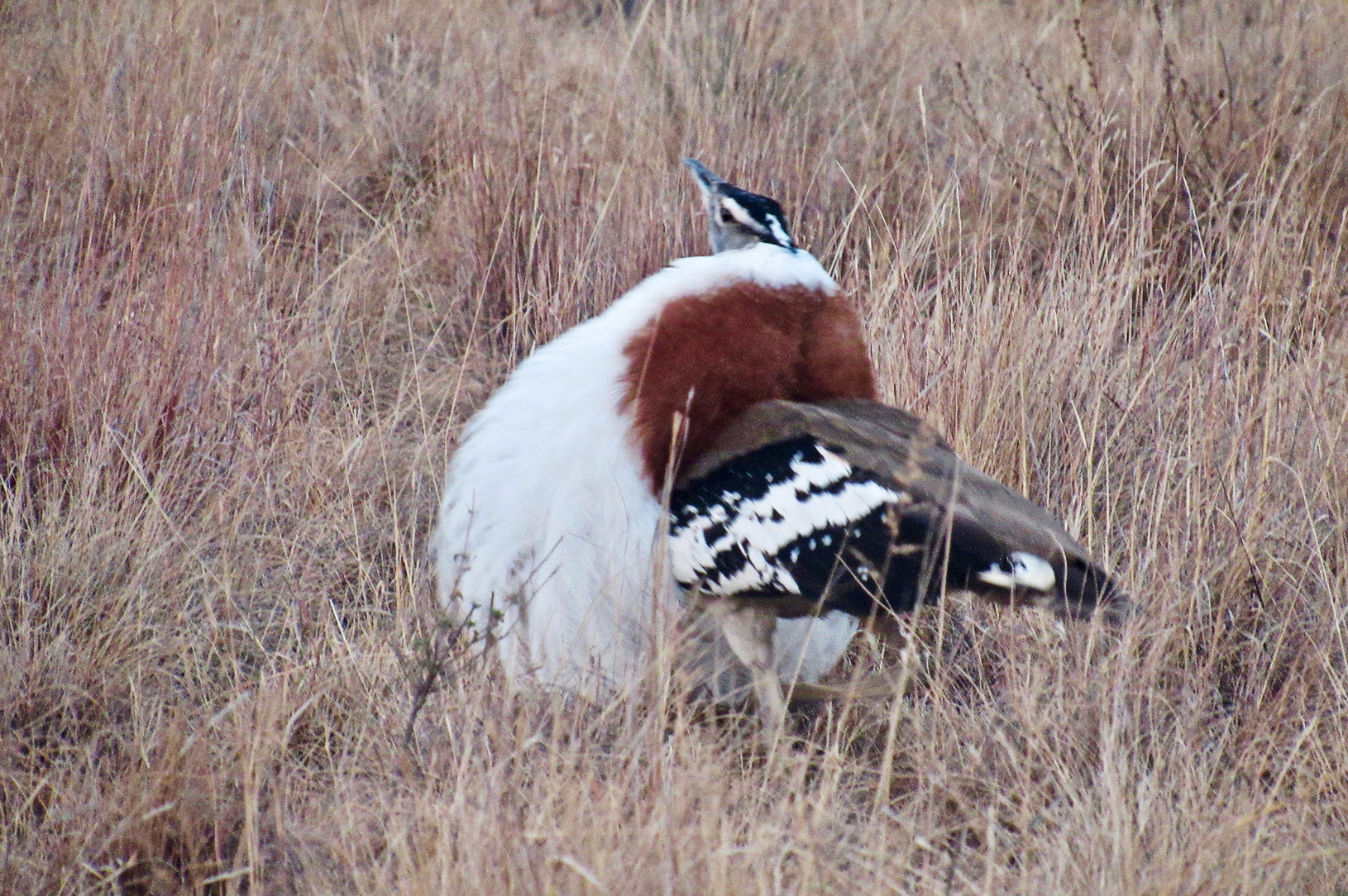 Posted at 07:17h in Ranger Diaries by t57wakgb_admin
0 Likes

Denham’s Bustard Previously known as Stanley’s bustard (Neotis denhami) and known in Xhosa as ‘Epwezampundu’. The question everyone asks is “Why ‘Bustard’”? By pronunciation it’s the same as ”bastard” but with a different spelling and meaning. “Bustard” is a name adopted from the French name “bistard”, itself derived from the Latin avis tarda and meaning ‘slow bird’ referring to their deliberate gait. The common names for this species refer to the English explorer, Major Dixon Denham, and the English naturalist Edward Smith-Stanley, 13th Earl of Derby.

It is the second heaviest flying bird, after the Kori Bustard. There are four species in the region, namely Kori, Denham’s, Ludwig’s and the Black-bellied. The bustard species lacks the hind toe meaning they cannot perch. They also lack the preen gland, a type of oil gland found in birds; relying rather on powder-down for plumage maintenance. It is a species of open ground, including agricultural land, grassland, flood-plains and burnt fynbos. It is resident, but some inland populations move to lower altitudes in winter and is a mostly silent bird.

It can be amazing for us and visitors to witness delicate and intricate courtship rituals, but it is important that those rituals are not to be disturbed. Attracting mates is a demanding process, and any disruption could harm a pair-bond and cause the birds to abandon their efforts; ultimately choosing less suitable mates or not mating at all. Males form a ‘Lek’ or an area for displaying. They display at regularly used sites.

In its Balloon display (usually given from prominent hillside, mainly in natural vegetation, sometimes in ploughed fields or cultivated pastures), the male inflates the neck (mechanism uncertain) and erects the concealed white neck and breast plumes. Feathers are mantle-fanned to form a broad chestnut panel, the head retracted and bill raised, wings are dropped and may remain puffed out for 1 hour. It stands, walks slowly and sometimes struts while displaying; intensity of the display varies. At climax of display, it turns the brightly coloured mantle towards the female with the white neck visible more than 2 km away.

The male displays intermittently throughout the day, but mainly early morning and late afternoon. In 1800 hectares, 5 displaying males, spaced 700 – 2000 metres apart, each occupying circa 60 hectares with 9 female (at least 2 breading females) are also present. 3-4 male display simultaneously to 1 female.

Flamboyant plumage colours and elaborate displays of prominent feathers, skin sacs or body shape can show off how strong and healthy a male bird is.  The intricate moves of a mating dance and the charming songs used to woo partners can help distinguish species, so birds are sure to choose compatible mates. Different courtship behaviours also reduce territorial aggression between birds, letting them relax together to form a pair bond. Depending on the type of behaviour and how the birds react in courtship can also display strength, health and mating desirability. This allows different birds to choose the best partners and ensure viable, healthy offspring. Eggs are laid directly on open ground in small open space (200 – 300mm across) among rocks, grass tufts, forbs or 300mm tall coastal fynbos, high enough to conceal incubating bird.

In Welgevonden Game Reserve we have got now a lot of leks of Denham’s bustard. The closest lek is on the southern side of our lodge. When you make your visit to 57waterberg don’t forget to ask your ranger about the second heaviest flying bird’s closest lek.

Written by your Ranger